A Little Bit of History

Founded in 1903 by Henry Ford, the Ford Motor Company was one of the first automobile companies in the United States and the world. Headquartered in Detroit, Michigan, Ford launched the company with $28,000.

The Model T was Ford’s first mass-produced model, introduced in 1908. In almost 20 years of production, sales totaled in the millions. Not long after, Ford introduced the Model TT, its first pickup truck, released in July of 1917. This truck had an elongated bed capable of a 1,000 lb. capacity attached to the Model T cab. These trucks cost a whopping $600 in 1917, and allowed Americans to use their vehicles to complete work, rather than just for transportation. The Model T Pickup was introduced in 1925, gaining enough popularity to sell 1.3 million vehicles in 1928. As a reintroduction to consumer vehicle production after WWII, Ford released the F-Series pickup trucks, its first line of comprehensive pickup trucks, and the beginning of what we know today of the F-Series pickup trucks.

Raptor? Isn’t that a dinosaur?

Yes, it’s also a dinosaur, but the Raptor we’re talking about here is a cold-blooded beast of a truck. A descendant of the F-150 SVT Lightning, the SVT Raptor was released at SEMA in Las Vegas, NV in 2008.

Wait, back up, what’s this lightning truck?

In 1993, Ford’s Special Vehicles Team (SVT) was tasked with creating a truck that fit in with the street racing scene popular at the time. If you’ve seen any of the Fast and Furious movies, you might know this as the red Ford pickup driven by Paul Walker in the first movie of the franchise. Based off the 9th generation of the F-Series pickup trucks, it featured a lowered suspension designed for a sportier edge and a 5.8L V8 putting out 240 horsepower. The Lightning also featured anti-roll bars, custom-calibrated shocks, and increased rigidity in the chassis. Even with all these sporty add-ons, the truck was still capable of all of the hauling and towing abilities of the normal 9th generation F-150. These were produced in the 9th and 10th generation body styles until Ford ceased their production in 2003.

Okay, so back to the Raptor.

So, at SEMA in 2008, Ford unveiled the F-150 SVT Raptor. A distinct change from the Lightning, the Raptor boasted a far more aggressive look and a design better suited to the mountains than street racing. Equipped with a 6.2L V8 with 411 horsepower, the Raptor was one of the most powerful vehicles Ford produced at the time. To really put it to the test, Ford entered it in the Baja 1000, an off-road race in the heart of Mexico’s Baja Peninsula. The Raptor had no problem competing with the terrain and has been a staple fixture of the Baja 1000 since.

After a short production hiatus from 2014-2015, the Raptor returned for the 2017 model year with some new upgrades. With an upgraded drivetrain, this Raptor was Ford’s most powerful yet, cranking out a whopping 450 hp out of a twin-turbocharged 3.5L Ecoboost V6. No V8? Not so much of a bummer, as the same motor is also used in the 2017 Ford GT supercar. The 2021 model even got an upgrade to 37” tires, making it even more imposing and intimidating on the roads.

The Raptor is way different than your standard F-150. On top of the Raptor badging and available decal packages, the Raptor boasts 3” Fox Racing shocks, heavy duty running boards and skid plates, upgraded headlights, available Recaro seats, a redesigned transfer case, five link rear suspension, and 37” tires mounted on special 17” rims. What does this all mean? The Raptor is designed to be fast on the roads but an absolute beast off-road. This truck would leave any other F-150 in the dust.

Paint protection film on a truck?

If you have any desire of taking your Raptor out of town and into the mountains, it would be wise of you to protect it from any conditions it could encounter out in the wilderness.

Not necessarily, and not from all of the things one could encounter when off-roading. Rocks, sticks, mud, trees, branches, sand, and more could be flung at your vehicle, and Paint Protection Film, or PPF, would be there to protect your paint and keep your truck looking like the first day you drove it off the lot. Self-healing Paint Protection Film from XPEL prevents any debris from coming into contact with your paint and will shrink right back to its original smooth glossy finish.

Here at Automotive Elegance, we begin our PPF process with a thorough wash of the exterior of the vehicle. The entire car (yes, even the wheels and roof!) is coated head to toe in foamy soapy water and rinsed twice, before being hand washed with microfiber mitts.

As a last step before being dried, the car is clay barred. Clay barring removes any tiny particulate or remnants of dirt left in the grain of the paint or in any superficial scratches. This ensures a thorough clean of the vehicle and a debris-free canvas for the installation of the film. The vehicle is then left to dry undisturbed indoors as not to cause water spotting. Okay, so what’s next?

After the vehicle is cleaned and dried, it is moved into the tinting bay to be tinted by Daniel. The sheets of tinting film are cut using a specialized plotter and computer program to be precisely the correct size for the windows of the Raptor. The windows are thoroughly cleaned and then sprayed with a solution that allows the film to slide around and move freely to be put in exactly the right spot. Once in place, the solution and any trapped air bubbles are squeegeed out, resulting in a tinted window. The windows are then left in place, rolled up, for the tint to cure and stick to the window 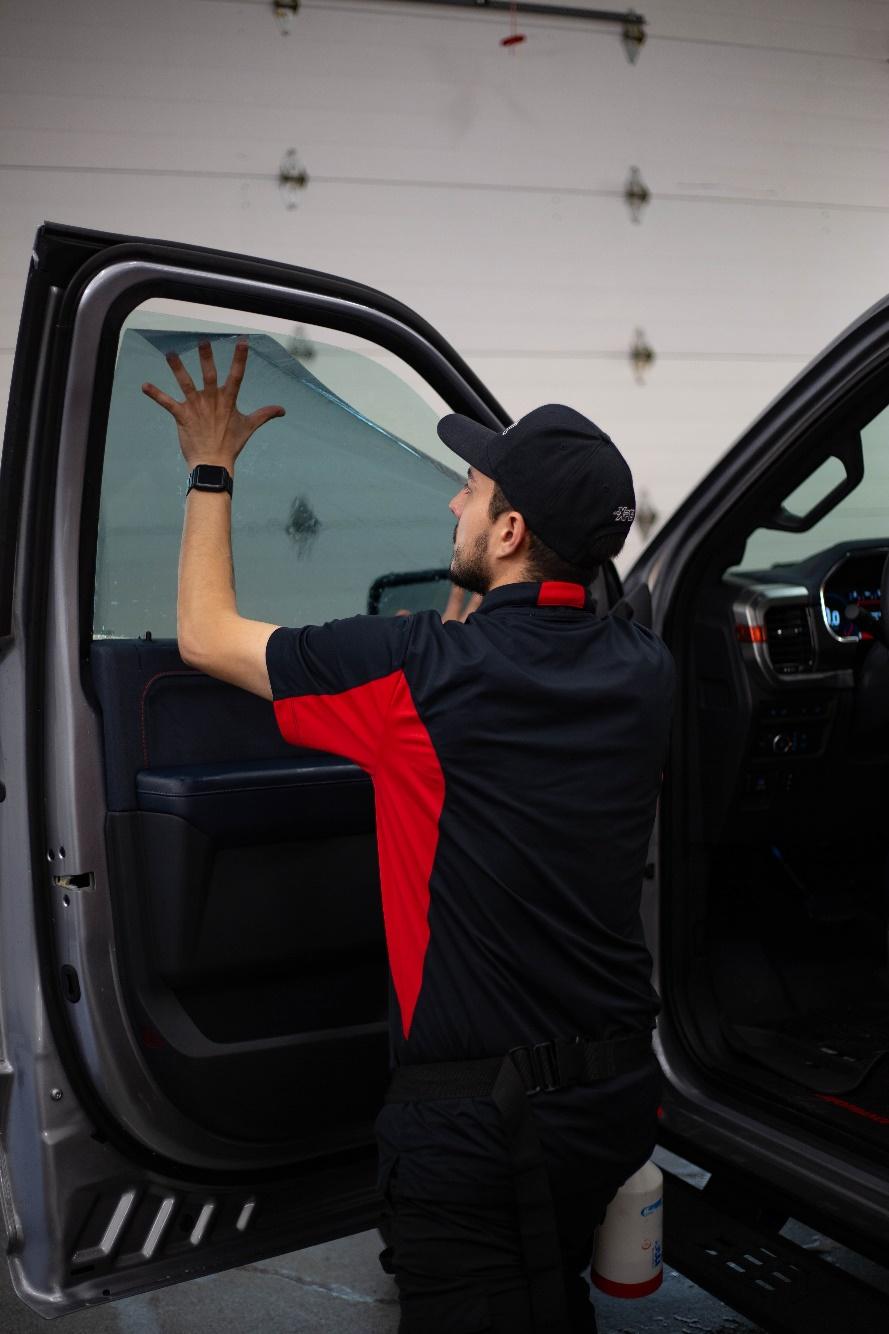 (Alt Description: Daniel laying the tint film on the window)

Now the vehicle is moved back into the main bay to receive PPF film. The film template is designed and cut by Tyler in the Design Center. A large plotting machine cuts the film to exact measurements as are specified in the computer programs. After each sheet is cut, the excess film around the panels is removed and the now-cut pieces and the backing paper are tightly rolled, labeled, and ready to be brought down to the vehicle for application. 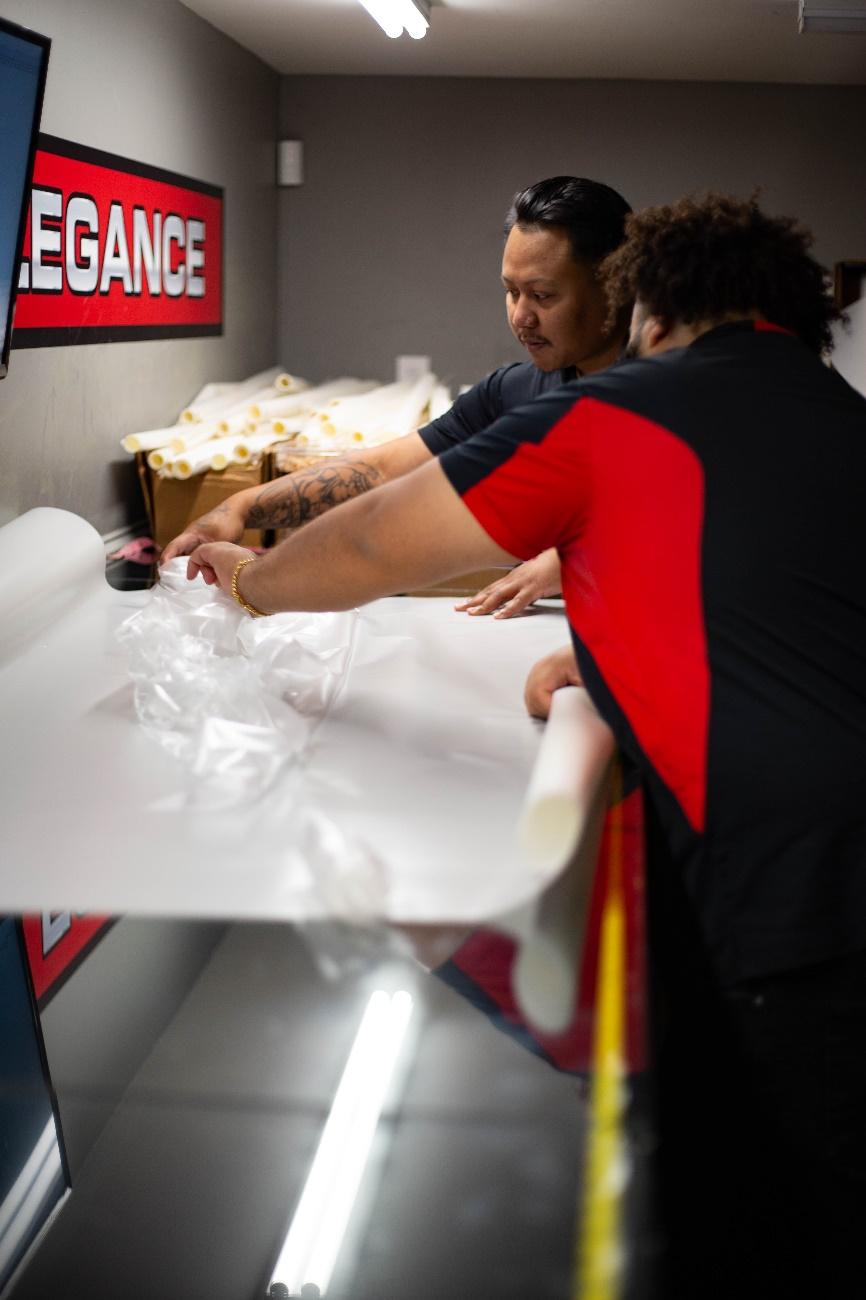 Get on with it! Put the film on the car!

Okay, okay! It’s a delicate process and takes time to do it correctly! The exterior of the vehicle is quickly sprayed and wiped to remove any dust or debris accumulated from sitting indoors, and then the PPF process can start. After the film has been prepared in the Design Center, each sheet is rolled tightly on the backing paper, labeled, and placed in a bin to be brought to the vehicle by the installer. Generally, the installers start with the hood and front end of the vehicle and work their way towards the back, usually finishing with the trunk and rear bumpers. The PPF sheets are laid out on tables while the surfaces of the car are prepared.

The car has already been thoroughly decontaminated in the exterior detailing process, but the installer will go over each panel again to ensure there aren’t any possible contaminants that may get stuck under the PPF. After the panel has been thoroughly wiped with a microfiber cloth to ensure cleanliness, the entire panel is thoroughly sprayed with a solution that will help the film to glide around easier and prevent it from adhering right away. The installer will also thoroughly spray the same solution all over the sheet of PPF, making sure no part of it is left dry.

The sheet is then draped over the panel of the vehicle and slid around to find the precise fit and lay of the contours of the vehicle. Often this will take many tries and several minutes of sliding and moving the PPF around, as it can be quite difficult with larger vehicles or more complex pieces to get that exact fit in the first try.

The installers use silicone scrapers, very similar to those used to install the window tint film, to squeegee the solution and any air bubbles from under the PPF as they’re applying. This also helps the sticky-backed film to adhere to the surface of the car. The installer will scrape, reposition, scrape, and reposition the PPF until they’re satisfied with the fit around the contours of each panel of the car.

The installer will check and recheck over their work as they’re installing the PPF until they’re fully satisfied with how the sheet of film has been laid.

The next step is moving the vehicle back to the tint bay to be Ceramic coated.

Ceramic? You’re going to cover my car in clay? No way, nuh uh.

I promise it isn’t as weird as it sounds! The Ceramic coating is a thin and completely clear shield that will help to protect any exposed paint, glass, and the PPF over time from UV rays that would otherwise damage or fade the paint. The bottle of the Ceramic coating is about the size of a travel bottle of shampoo. It’s accompanied in the box by a small foam square and a small microfiber application cloth, similar to one you’d clean your sunglasses with. The application cloth is wrapped around the small foam block and the application is ready to begin. 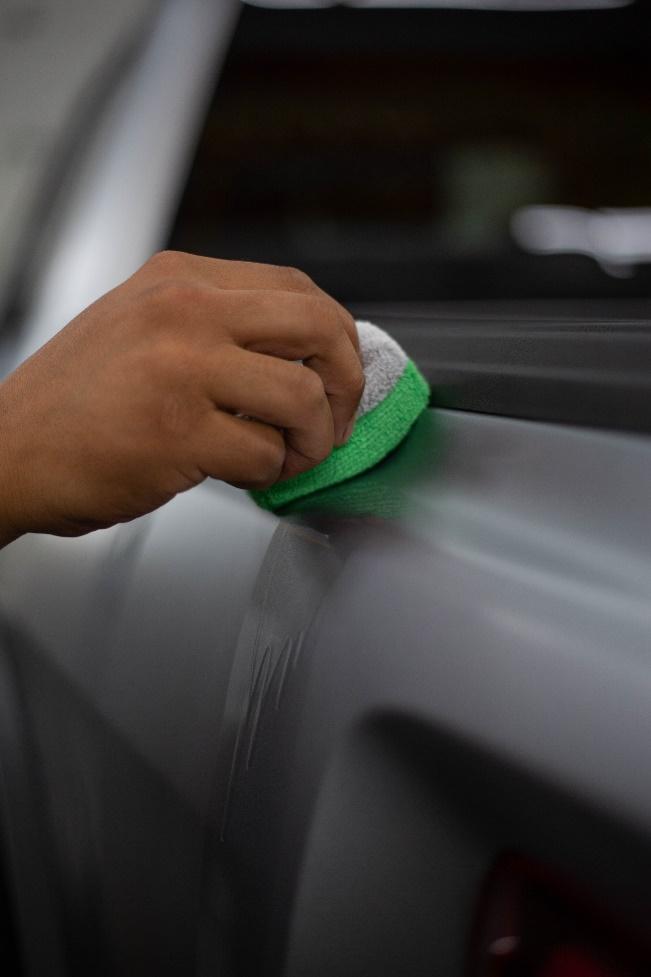 The Ceramic installer works panel by panel, slowly and carefully doing their work. A few drops of the ceramic are placed onto the microfiber application cloth and are then carefully spread evenly across a small portion of the panel, ensuring full application to every square inch. After applying to the panel, the installer quickly picks up their additional microfiber towel and wipes the surface, ensuring that the ceramic doesn’t leave high spots or low spots. These high and low spots can very much affect the overall look of the vehicle by creating strange lumps and bumps on the vehicle’s surface if not applied correctly.

After each panel has been coated and the car has been completely protected by the Ceramic coating, the vehicle is left undisturbed at least overnight to allow the coating to fully cure. Otherwise, if not cured, the coating can smear or get debris like rocks or bugs stuck in it.

After the curing of the Ceramic coating, the PPF process is finally done on the Raptor. The truck is now fully protected from anything the road or off-road could throw at it, including bugs, rocks, sticks, or that lug nut that fell off the 18-wheeler just up the road. To so thoroughly protect a truck that is capable of so much is an excellent idea and will lead to saving money in the long run on not having to repaint panels, replace bumpers, or even boost the trade-in value of the car when going to buy a new vehicle. The Automotive Elegance Bespoke Package has protected every square inch of the exterior of the Raptor exactly to the customer’s wishes, and before leaving with their newly transformed truck even said “I don’t want to drive it now it looks so good!”